May 25th, 2013 - This was a weekend of full moon in the month when Yosemite Valley is known to be at its best! As accumulated snow on Eastern Sierras melts, it transforms into dream like waterfalls adorning towering granite cliffs. But this weekend was more than special. There was a possibility of witnessing a very rare occurrence, a "moonbow" !! The temptation was too strong to resist.

Question: So what is a moonbow (also known as lunar bow) and why is it so rare? Why does it not occur every full moon night? Why is it not observed on many other waterfalls in the world?

Answer: A moonbow is like a rainbow produced by light reflected off full moon. Its formation depends on all of the following conditions (1) Strong moonlight from full moon on a clear, cloudless night (2) A lot of water droplets suspended in clear air, almost like rain (3) The angle between the antilunar point and the direction toward the water mist must be near 42 degrees. This last requirement that moonlight must illuminate the mist when it is at a certain angle and must be low at the horizon rules out moonbow formation on many other waterfalls in the world that otherwise may have a lot of water and mist. The water volume at Yosemite falls peak in May and then wanes. Combine that with the probability that full moon night will be clear. That is what makes it so rare. This moment may be the only chance to view moonbow at Yosemite falls for this year because during full moon in June, there may not be enough water and mist.

Initially I felt a little anxiety at the thought of standing alone at the base of the falls at midnight when the wildlife (bears, mountain lions) will be active! I carried my flash lights, a thick jacket (night can be near freezing at Yosemite), gloves and winter cap and ofcourse my gear. Arrived at the spot at 8 PM. Noticed two folks with their tripods already there !! It was important to reserve the spot for best uninterrupted viewing, tripod setup. The moon was forecast to rise at 9:15 PM. Add another 1 hour because the valley is surrounded by cliffs. So the earliest when moon could have been view able was 10:15 PM. On a typical day, I pray for clouds because they make sunrise, sunset colorful. But this was the moment to wish AWAY the clouds.

Finally the moment arrived. The moon was up. More photography enthusiasts had joined by then. It was 10:30 PM . But the moonbow was nowhere in sight. At 11 PM, noticed a very small faint partial moonbow. Remember, this is not visible to your eyes, only through a well exposed picture from camera. Waited a while but it wasn't getting any stronger. So folks began to leave. well.. by 11:45 PM it peaked. A colorless band was visible now through naked eyes! Colorless because your eyes cannot see the colors in dark. The camera of course showed beautiful colors ! Yippee!! Photographers/enthusiasts cheered and clapped :-) While shooting moonbow, care had to be taken to not expose it for too long as the bow shifts a little with time. I kept the ISO low (200-400) to minimize the noise. Having microfiber helped as the mist of the waterfall  sprayed my lenses. I had to keep wiping it off through out the shoot.

It was past midnight. I packed my gear, to hike back to the lodge. It was like witnessing a rare natural wonder !! A dream like journey :-) 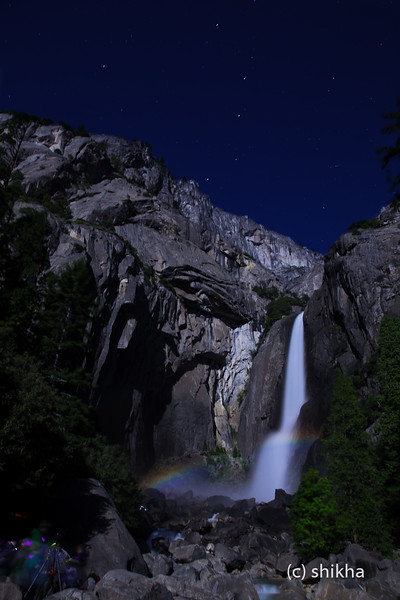